This common Kalahari bird, which is often admired by volunteers and visitors alike, has grown famous for its ability to fool numerous animals using a variety of tricks. While the fork-tailed drongo (Dicrurus adsimilis) does not rely solely on these methods, they are known kleptoparasites (meaning that they steal food from other animals).

You will often find fork-tailed drongos following larger animals around. If they aren’t eating the ectoparasites (like fleas and ticks) found on these animals, then they’re simply waiting to catch the insects disturbed by these animals as they walk through the grass. Similarly, these birds will follow wildfires to catch fleeing insects and bugs, and even though they are mostly carnivorous, they won’t turn down some nectar when given the opportunity.

Over and above that, fork-tailed drongos are absolutely fearless birds. Apart from the monogamous breeding pairs they form, they are solitary and highly territorial. Drongos will dive-bomb, mob, and attack large birds of prey until they are out of their territory. 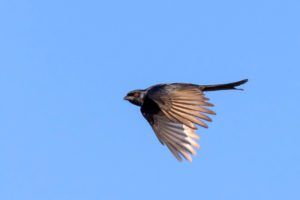 Now here is where their remarkable skillset comes in – fork-tailed drongos spend a quarter of their time following other animals, and a quarter of their meals come from thievery. Their most notable Kalahari victims are meerkats (Suricata suricatta). The drongo will begin to build trust in the meerkats by sounding an alarm call when predators pass nearby. Such a threat will see the meerkats flee to the safety of their underground network of burrows. Once the trust is established, the drongo will patiently wait for a meerkat to find a juicy meal before playing the false alarm card. As the trusting meerkats flee for their own safety, they abandon any food they had successfully foraged, thus gifting the drongo an easy meal. Fork-tailed drongos tend to use this tactic for catching prey that would otherwise be too large for them to catch on their own (e.g. scorpions or lizards).

However, the deceit comes at a price as the drongo will have lost the trust of the meerkats. Commence the drongo’s incredible imitating skills! The drongo will wait for a meerkat to find a worthwhile meal before cleverly imitating the meerkat’s own alarm call to fool them into thinking their sentinel (meerkat on lookout duty) has spotted a danger. The sentinel’s call won’t be ignored by the colony and once again, the meerkats discard their findings and flee for safety.

If the drongo’s actions cause the meerkats to doubt the sentinel’s alarm call, the drongo begins to mimic the alarm calls of different species, something meerkats wisely use when other animals are feeding nearby. In fact, a team at the University of Cape Town, lead by Tom Flower, recorded 51 different drongo alarm calls from nearly 850 hours of observations.

They use their abilities both honestly and dishonestly, causing the victims to never be certain if the threat is real or not. This is a tremendous skill as it requires a delicate balance of knowing when to lie, and when to tell the truth. A skill which helps the drongo to survive in the harshest of environments.

Join our project to experience volunteering with animals!

Read more about our project

Deception by Flexible Alarm Mimicry in an African Bird 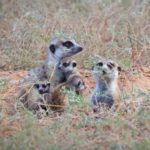 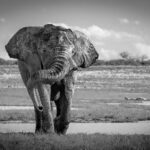 Next Story:
5 Reasons Why An African Conservation Experience…