Meerkats of the Kalahari

Volunteer with meerkats – While most volunteers think fondly of meerkats (Suricata suricatta) thanks to role of Timon in “The Lion King”, scientists have long discovered the excessive levels of violence that occur in meerkat colonies. In fact, the species has been proven to be the most murderous mammal in the world! It is not only jackals, foxes and raptors that pose a threat to the meerkats as over 19% of all meerkats are murdered by other members of the species, with a particularly high rate of infanticide taking place.

A team of scientists that followed meerkats for 11 years reported that most meerkat interactions with foreign meerkat colonies will either result in violence, or a violent display. The meerkats act with aggression and are quick to stretch their tails and raise their skin, thereby making themselves appear larger to the opposing colony. What follows is a fight for territory, a fight that can often lead to death. 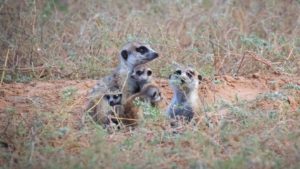 One cannot underestimate the importance of good territory, especially when surviving in an extreme environment such as the Kalahari. The best territories are generally those with the most burrows and forage. Meerkats share their burrows with ground squirrels, African springhares, and yellow mongooses, and an area with many different burrows (50 – 100m apart) offers Meerkats the largest possible feeding areas as they will seldom venture too from one of their escape routes. While meerkats have an incredible ability to thermoregulate, their burrow temperatures tend to lag the outside temperatures which means their burrows are hottest at night, and coldest during the day when they are out searching for food. Therefore, one can understand the significant territory plays in the survival of the group. 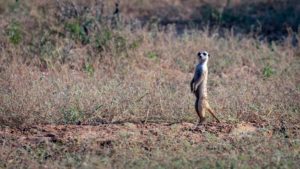 Meerkat colonies average 20 members which are comprised of a dominant male and female, their young, and subordinate nonbreeding members that assist in raising the pups with the oldest members having the highest social standing. However, subordinates that do have pups often have their pups killed by the dominant female, and this can cause these subordinate members to flee the colony and search for a foreign group to team up with. The more members a group has, the better the chance of survival as their entire lifestyle is built upon safety in numbers motto. The more members there are to defend the group, forage for food, help raise the pups, and win new and improved territories, the more likely the group will be to survive. The strength of these close-knit colonies explains their willingness to fight to the death should the need arise. However, members of interacting colonies offer a variety of behaviours when they encounter one another, thus leaving violence as a last resort. They can observe and chase the rival group, put on a war dance, dig in their rival’s burrows, retreat, or attack violently. Most of the time a violent display is enough to fend off the opposing gang, but nearly one in every ten encounters will result in the death of a meerkat.

Join our project to vounteer with meerkats and to witness these animals living in their natural habitat!

Read more about our project 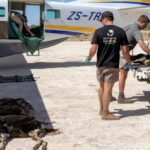 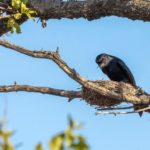 Next Story:
The Kalahari Job